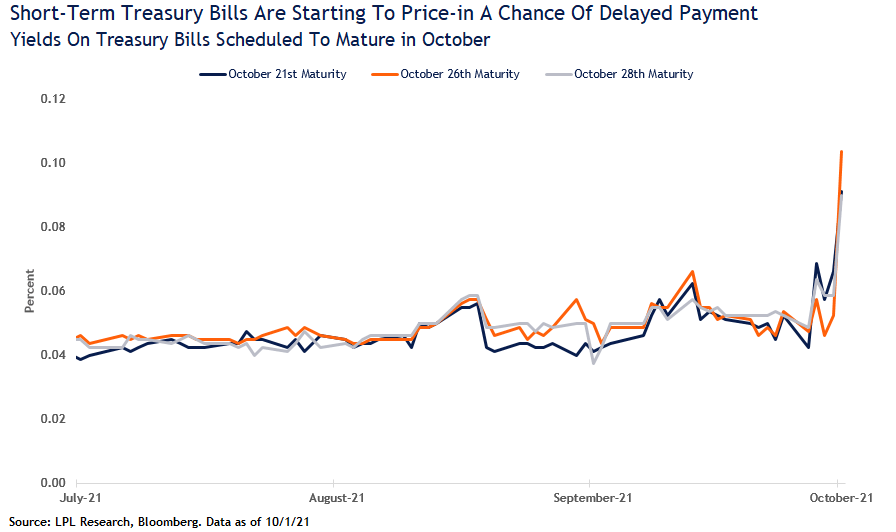 The debt limit—commonly called the debt ceiling—is the maximum amount of debt that the Treasury Department can issue to pay its, already committed, financial obligations. The amount is set through Congress and has been increased 78 times since 1960. Through a bipartisan budget act in 2019 however, Congress suspended the debt ceiling through July 31, 2021. Since August 1, Treasury department officials have essentially shuffled funds around to meet the nation’s payment obligations — but Treasury Secretary Janet Yellen says the department will no longer be able to pay all of its debts when they come due on or shortly after October 18.

“Our base case is that Congress will do the right thing and raise or suspend the debt ceiling in time,” noted LPL Financial Fixed Income Strategist Lawrence Gillum. “However, the longer they wait, the more unnecessary volatility we’ll likely see in markets.”

If the debt ceiling isn’t resolved, the U.S. Government would technically default on its contractual obligations. As seen in the LPL Research Chart of the Day, bond markets are starting to price in, however remote, a chance of delayed payment. Yields on debt maturing after October 18 have started to move higher as they are the securities most at risk of a delayed payment. As we get further into October, unless resolved, we could see yields on additional short maturity Treasury bills move higher still as the prospects of non-repayment, however slight, gets further priced into the market.

At this point, there are two traditional ways Congress could raise/suspend the debt ceiling- through a bipartisan vote or through budget reconciliation. A bipartisan vote, which would need 60 votes in the Senate and thus 10 Republicans to vote with Democrats, seems unlikely given the reluctance of Senate Republicans to vote for an increase in the debt ceiling. The more likely scenario is that the debt ceiling is raised or suspended through the budget reconciliation process, which only requires 51 votes so the Democrats can go at it alone. There has been a general reluctance from Democratic leadership to go this way but it is increasingly likely the only realistic way to stave off a technical default.

Other, less tested options, include the Treasury minting a trillion dollar platinum coin or through the Public Debt Clause found in the 14th Amendment, which some have interpreted to allow the Treasury to continue to issue debt to prevent default. Yellen has recently commented that both of those options are currently unworkable and both would likely be tied up in the courts for some time.

U.S. bond market investors have taken for granted the government’s ability and willingness to pay its debt. While its ability to repay its obligations is not in question, the debt ceiling debate complicates the country’s willingness to pay its debts. In 2011, Congress waited until the very last minute to fix the debt ceiling issues and S&P downgraded the country’s debt rating to AA+ from AAA because of the questions surrounding that willingness to pay its obligations. Now, another rating agency, Fitch, has threatened to do something similar if Congress fails to act soon. Another debt downgrade would likely be disruptive to financial markets. While we think Congress will act in time and either raise or suspend the debt ceiling, these games of political chicken can introduce volatility to markets in the meantime.